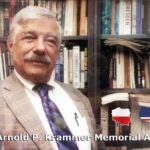 Criteria for the graduate Award:

Criteria of the Award granted to 1st  and 2nd year students:

The jury of the A.P. Krammer Award consists of the staff of the Department of English, appointed by the Founder, Jack Lala, MA. Nominations for the award for the best graduates are submitted by all staff members of the Department in July each year, and all awards are presented during the inauguration of each academic year at the Institute of Humanities of the Carpathian State College in Krosno.

Dr. Krammer, 1941-2018, was an American Historian who specialized in German and United States history. His career as a professor and teacher at Texas A&M University spanned 5 decades until his retirement in 2015. He led numerous Study Abroad programs while at A&M, bringing students to Germany, Italy, Normandy and Poland. He also helped to organize the Holocaust conferences that were held at the Jagiellonian University from 2001 to 2011 along with his good friend, Professor Fritz Koenig. His connection to Krosno State College began in 2003 when he brought a group of his students to Krosno at the urging of his friend, Professor Władysław Witalisz, and his former doctoral student, Jack Lala. He remained a good friend to the students of Krosno State College until his death. This Award is dedicated to his memory, and in recognition of his contributions to our school, and his pursuit of the lessons of history.